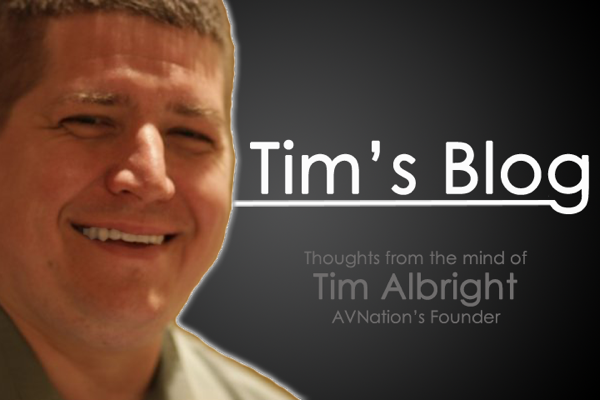 This week Commercial Integrator released their Top 40 Influencers Under 40. It went wild on social media; Twitter, Facebook, Google Plus, Linked In, and more. Tom LeBlanc, Craig MacCormack, and the gang at CI have spent the last few months combing through your nominations, researching the candidates and debating who should make this list. From what I understand, there were quite a few nominations for them to go through. As someone who made it onto their final list, I am humbled and thankful for it. Myself aside, here is why this list, and compilations like them, matters.

This may seem like an obvious thing, but recognizing an industry leader for doing what they do every day gives everyone a little pep in their step. It lets the person know that what they do is not going un-noticed, and it is confirmation to their co-workers and higher ups that they work with a pretty special person in AV.

I am a firm believer in setting goals. I have a number of them, both personally and professionally. This 40 Under 40 list is a great bar for someone to set for themselves. Goals give us the driving instructions for our lives. They are what allow us to know what the next few steps should be. This would be one of those things to set up as a goal.

There are a number of AV professionals I know on this list. Some of them host programs on AVNation, others have been guests on one show or another. Then there are others I have not heard of up to this point. This gives everyone the opportunity to reach out, say congratulations, and begin a relationship.

This list is by no means complete. There are some on the list that may have won out over other deserving individuals. I had my own ideas as to who should be on the final tally. CI also made the editorial decision not to include manufacturers. Had they done so, this list would have had a much different landscape. That being said, it gives us all something to talk about and debate around the water cooler.

The bottom line is, this is a great list of influencers in the AV industry. If you don’t know someone on the list, I would say reach out and say hello. If it is me, you can email me at tim at avnation.tv  or call me at 618-567-6467. Otherwise, follow the other list-makers on social media.

I would like to thank whomever nominated me for this honor, Commercial Integrator for creating the list, and those along the way who have helped me get where I am. My relationships with integrators, manufacturers, InfoComm, publications, and others continue to amaze me. I would also like to thank all of you who have sent me the personal notes, emails, phone calls and texts. Again, humbled by this honor. As one of the oldest (and therefore ones that can’t make the list again) it’s a good company to be in.