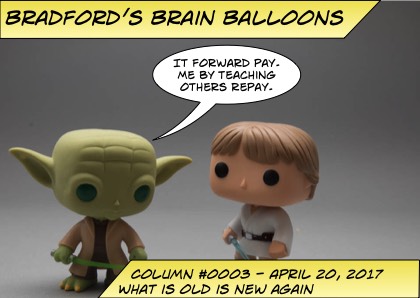 Brock and I have known each other for a while. I realize that my opinion of the article may vary from other’s as I have the context of knowing Brock. I have seen Brock share his knowledge with people freely. I am lucky in that he has shared some knowledge with me.

Some of the ideas he posited in the piece are very valid. Some opinions I disagree with. Many ideas are somewhere in between. One of the points he makes is a business practice and succession planning, nothing unique about the AV Industry.

Brock makes a statement that many people are taking the approach of “it is faster for me to do myself than to train someone else.” That approach is a false economy, not just denying someone from learning. While it may be faster this time to do the task yourself, it will not always be. It prevents people from moving on to more advanced tasks. It prevents you from taking on more valuable tasks. If the job takes you 15 minutes to do but one hour to train someone else, the short-sighted answer would be to do it yourself. Spending the hour to teach the person will mean that the fifth time the person does the task that investment is starting to pay off. One also gets to train the new person, I didn’t say younger, in the process and culture of your work environment. Yes, I overly simplified but it is the concept that is important.

I also do agree that some of the experienced people do not share their knowledge as they feel it is their turf and people need to prove they are worthy. It typically starts with phrases such as, “Kid, I was installing speakers when you were but a twinkle in your parents’ eyes.” I do not think that is entirely the experienced people’s fault. Given the current economic situations some people are concerned that if they share their knowledge, they will be replaced by a less expensive person. That could be the cause of changing employer every two years that Brock referred to.

It is not all about the experienced person not sharing knowledge. The novice needs to become invested in learning. There is a saying, “It is the student’s responsibility to ask questions of the teacher.” I find that very true. If the experienced person approaches a novice who is not ready to learn, it is uncomfortable for both. The advent of the Internet has allowed people to “gain” knowledge on demand; people go to Wikipedia, WikiHow, iFixit, YouTube… etc. It is not the same as experience.

An interested novice will come to the teacher asking questions. They will be ready to receive the knowledge and appreciate it. I have been lucky enough to have people come to me and ask questions. I make time to mentor people if asked, passing on my knowledge and experience. It gives me hope that people are making an effort to improve themselves in various ways. It is very satisfying to work with one of my previous interns as a client; it is rewarding to see people advance their career after asking you for advice.

A person I believe I have helped has this quote from Sir Paul McCartney hanging in their office, “You get the argument, ‘Make way for the young kids,’ and you think…let them make way for themselves. If they’re better than me, they’ll beat me.” I add to that, “I will teach you how to take my job, I will get a chance to move forward.”

Thanks for taking a break from Stanley Cup® playoffs to read my thoughts.
Go Leafs Go!
Bradford 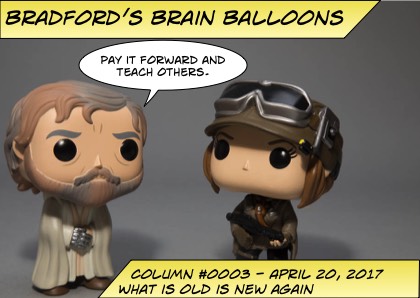