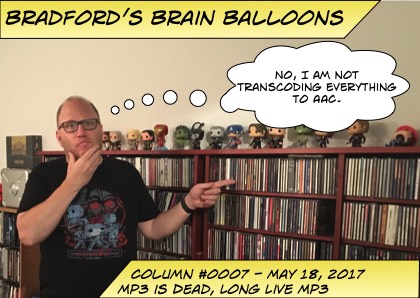 In April an astonishing 30 years of audio technology development came to an end with a simple sentence, “On April 23, 2017, Technicolor’s mp3 licensing program for certain mp3 related patents and software of Technicolor and Fraunhofer IIS has been terminated.” The reason for the termination, “Those [modern codecs]can deliver more features and a higher audio quality at much lower bitrates compared to mp3.”

After reviewing some MP3 history. I am more surprised about the impact and path of this encoding format. The first studying of encoding schemes for higher quality audio over telephones started in the 1970’s The first compression hardware was released in 1979. That was two years earlier than the debut of the Compact Disc. The Fraunhofer Institute for Integrated Circuits IIS was working to improve audio quality before the public release of the CD.

I am not going to go through the entire history as the website does a good job of that, I just want to point out some things that stand out to me. Also for those that are concerned, your MP3 files will continue to function.
The first motion pictures expert group in 1988, back when most of us were playing Oregon Trail, started to address the idea of distributing content efficiently. In 1989 Dr. Brandenburg outlined methods for compression in his doctoral thesis. The goal was to make radio sound better using analog phone lines. The antithesis of the use the encoding is best known.

Many automotive audio systems will only play MP3 files or WMA files. My family’s past four vehicles would only play MP3 files, not WAV files. The systems are MP3 focused to the point that uncompressed formats are not supported. MP3 technology is not bad for audio on its own. When the MP3 encoding is applied badly that is the problem.

The iPod/iPhone revolution required the technology that started with MP3 and extended to AAC. If it was not possible to compress content, the iPod announced October 23, 2001, would have failed. It held an amazing 5GB of storage, perhaps enough to store eight uncompressed files of a CD. Yes, there were other MP3 players at the time. Apple created an MP3 player accessible to the public. I had a Rio CD player that would play CDs of MP3 data files. I still needed to lug around a CD case to have a good selection of music. Now think about how quickly the physical format of CD for purchasing media disappeared as a result of the success of compressed audio.
As people working in the audio industry, we also fall into the situation of specifications overriding our listening. “It looks like it sounds good,” is a phrase I use quite often. About three years ago I wrote about this exact issue on my personal blog. There was one thing I should have done to accompany that post, provide an example. I now am going to fix that.

I asked my friend Marian Call if I could use a snippet of her most recent album, Standing Stones as my example. (You should listen to the rest of the album– She didn’t ask me to do the plug, I want to support independent artists.) Below is a sample from the song that I have converted to different bitrates to illustrate the fact that an MP3 does not mean bad audio. To select tracks, simply click on the one you want to hear.

Thank you, Fraunhofer Institute for Integrated Circuits IIS for the efforts to improve audio and ending the licensing fees for MP3. To answer the question, “Why do I care?” It is an import part of the audio history of the past thirty years. Eliminating licensing fees I hope will allow more applications of the MP3 format in software applications, such as Audacity.

Thanks for reading. Don’t forget the first compression process was intended to improve telephone audio. How much has telecommunications changed as a result of compression?
Bradford
May 18, 2017
[BradfordDisclaimer]