You are at:Home»Article»AVI Systems Opens New Facility in Minneapolis

During the fall of 2015 Josh Srago, Kirsten Nelson, and I were attending the national sales meeting for AVI Systems, an integrator headquartered in Minneapolis. There were some great speakers, talk of eagles for some reason, and the announcement by AVI’s head, Jeff Stoebner, of a new training facility. Fast forward to late May of this year and AVI has opened their new facility. 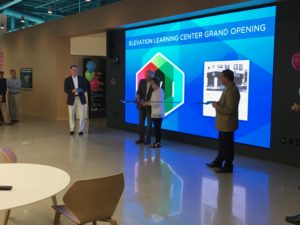 Upon walking into the installation, you are immediately struck by space. The vast amounts of space that are throughout the building. As you walk to your left the first demonstration conference room meets you. Just beyond two large format training rooms with the ability to either be joined by open space or closed off entirely.
Follow along into the AVI Systems corporate support center. Here is room for internal training called “The Lab.” With high-top tables you can teach CTS (I or D) classes, programming, even soldering techniques.
There are huddle spaces, traditional conference rooms, kitchen, and about a dozen “phone booths” for you to take an important, but private, call. The facility was well done, put together, and on full display. 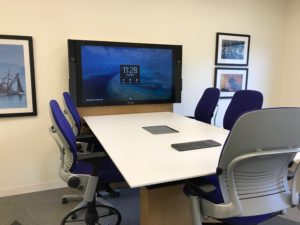 I have seen two schools of thought when creating a space like this. The first is to use the audio video technology you use the most. If you are an Extron house, then you’ll use their control system and put your best Extron face forward. Are you a Crestron dealer primarily? Then the facility will be running DM and feature plenty of Crestron control and touch panels.
The other thinking is to use as many systems as you have access. This allows your clients and those coming through space the ability to get a sample of each of the different lines you carry.
AVI Systems opted for the latter and did so relatively seamlessly. There was also a sighting of a Microsoft Surface Hub. If I were a customer, it would be difficult to discern the AMX control room with the QSC panel controlling a conference room. Before you scoff at that, ask yourself if the professor in your favorite college knows the difference.
AVI Systems has expanded throughout the Midwest and out to California. In doing the expanding, they needed a way to maintain consistency in educating their techs, installers, programmers, and others. This facility is a significant step toward those goals.