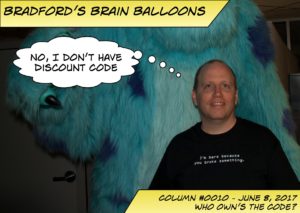 Note: This column in no way, shape, or form, provides legal advice or counsel; neither implied or otherwise. It is highly encouraged and recommended that you consult an attorney or legal authority for advice.
The topic of who owns the code used to control a system has been covered quite often by various people and in various circumstances. The question is basically this, “If someone configures a computing system using various commands, who owns the sequence of commands?” Yes, I phrased it that obliquely on purpose. Part of these discussions are based on the idea that computer code can be considered the same as other text, books, magazines, plays … etc and as such can be protected by copyright. At the same time that approach to code means that it can be considered a work for hire and owned by the person commissioning the work. The opinion of code being equal to text was put forth August 30, 1983 under the case of “Apple Computer, Inc. v. Franklin Computer Corp.” This illustrates just how long this debate has gone on. This topic has been discussed on AVNation™ multiple times, Controlling the Code for instance, the Association of Software Professionals has posted an opinion, Mark Coxon has opinions, and many others as well.

I believe that there are additional items to be considered. The courts have ruled that the user interface and operation is not protected under copyright. This case took place in 1996 between Lotus Development Corp.and Borland International, Inc. about porting macros between competing software packages, this required using the same menu structures. The fact that one may copy the operation of an interface is an important item as well. The design and look of software interfaces can be protected, but not the actual operation. This case law means that one cannot copyright the process of pressing play, but can copyright the look of the play button itself. A minor but important distinction, one can copyright the appearance.

These topics get more interesting with the proliferation of open source code and code sharing. Various manufacturers use Microsoft and Linux products as part of a basis for their software. Then there is also code covered under the GNU General Public License that also requires companies to make available the code that they used and modified to the general public.

There are also usage rights to consider as part of this discussion. If one programs a control system for a single conference room or classroom, does the end user have the right to redeploy that code multiple times into other hardware?  One of the common approaches is to license the software, specifically outlining how the software may be used. There are others that feel the software is a work for hire, as such the person paying can use it however they want. It is a tangled web of questions and opinions.

I can continue to go on about all the different items to consider, but I am confident that there will never be a solution that works for all situations. Even within AVNation we disagree over how to handle code ownership and licensing.

There is one solution that I can recommend without hesitation. Define and document the ownership and usage rights for the software as part of the scope of work and pricing negotiations. If it isn’t documented before any questions occur it is much more difficult to evaluate and understand.

Thanks for reading, I am off to go read some End User License Agreements. Oh look Bose, Crestron, Harman, TiVo, Microsoft, Apple … ad infinitum all use code that is open source. I wonder how that impacts this discussion.
Bradford