Orlando, Florida, USA (Oct 5, 2017) –Absen Inc., a global leader in LED display solutions, announced today the U.S. launch of the company’s newest fixed indoor LED series called, Acclaim. Making its official debut at WFX Conference and Expo, the Acclaim Series provides the perfect indoor direct-view LED solution for today’s markets such as retail, corporate, transportation hubs and house of worship. WFX, the largest conference and church expo in the U.S., will take place October 11-12, 2017 at the Kay Bailey Hutchison Convention Centerin Dallas, TX.
Where SIMPLE meets BRILLIANT
Available in a wide range of pixel-pitch configurations; 1.2mm, 1.5mm, 1.9mm, 2.5mm and 3.8mm, the Acclaim Series meets the needs of many indoor installations and pixel pitches. Acclaim’s HD aspect ratio and 27.5” diagonal size allows four panels to create a 55” display like that of a LCD, but without mullions. The four panels can be installed with a standard VESA mount and allows the end user to work in a standard 16:9 aspect ratio, a very common aspect ratio in the HOW market. 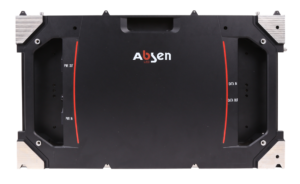 Installation of the series is extremely fast and easy whether it be mounted to a wall, hung or free-standing. Acclaim comes with an Easy Mount Kit that has a thickness of no more than 4 inches allowing for ADA compliant installations. Each front or rear installed panel is interchangeable left to right and are held in place by 4 corner magnets. The series offers creative flexibility and can be customized to provide up to 90-degree convex or concave curves and angles.
Offering outstanding image quality, the Acclaim Series displays clear textures often hidden or lost in shadows. Outperforming LCDs with higher brightness, superior contrast and truer colors, the Acclaim also creates a seamless video wall to deliver clear, unbroken imagery and messaging.
Long lasting with quick and straightforward service
Acclaim is built to last with an LED life of 100,000 operating hours and is designed for easy serviceability and repair with universal magnetic modules that lock into place with guided grooves that prevent potential bending or torqueing of the panels.  The Acclaim also features innovative black masks that increase contrast, yet are simple to take off and put on to allow repair of the modules’ LEDs. With Absen Affinity color calibration, the Acclaim will continue to look uniform in color, brightness and consistency throughout the life of the product.
“We couldn’t be happier with this new series,” said Gary Fuller, Senior Advisor for Absen Inc. “As we move deeper into the commercial display market, we are always seeking to develop products that will be needed down the road and the Acclaim Series is an excellent example of just that.”
Join us in Dallas
At WFX, Absen will showcase the Acclaim Series as well as the popular N-Series at booth #1007. To schedule a demonstration, contact your regional sales rep at sales@usabsen.com.
About Absen Inc.
Absen Inc., the US subsidiary of Absen, is a leading LED display manufacturer with headquarters in Orlando, FL. With hundreds of installations across the USA, Absen has quickly become the LED manufacturer of choice for a variety of prestigious projects. Highlights include sporting venues for the NBA, MLS, and NBC; casino installations for MGM Grand and Caesars Palace; premier events including the Ultra Music Festival, Comic-con, and the Emmys; and digital signage in the heart of NYC’s Times Square.
Learn more about Absen at usabsen.com.