You are at:Home»Features»Operating Digital Signage Networks on Campus 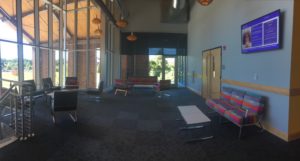 Collaboration. One important key to the success of major projects on higher education campuses that cannot be understated is the need to work with people who have a stake in accomplishing the university’s collective goals. The stereotype of higher education institutions jokes that there has to be a meeting to plan a meeting; or that there is a committee formed for everything. While there is often truth in jest, the truth is that doing great things on campus requires that collaboration with your peers to harness their strengths in order to reach your goals. Digital signage is no exception.
Like most people you have encountered digital signage in airports, retail spaces, public transit, and likely even on your own college campus. As technology continues to grow and the value of this technology is realized, there will be a call for greater expansion of digital signage networks across campuses. Some of this may stem from users on your campus collaborating with other schools—a lot of the requests that we get come from some of our users visiting other system schools and seeing the way technology is implemented on other campuses.
Digital Signage Expo, to be held March 28-29 at the Las Vegas Convention Center is an international conference where end-users, vendors and systems integrators gather to see the latest in digital signage technology and attend a series of discussions and presentations from all perspectives of the industry. “Operating Digital Signage Networks on Campus” is the title of the session I will be co-presenting — with an emphasis on collaboration.
The main learning objectives of this session will be:

Identifying stakeholders and defining roles are two tasks that are undoubtedly closely related, but depending on the structure of the college planning such an installation or consolidation, these do not always involve identical groups of people. If this project is being viewed from an academic perspective, for example, stakeholders could certainly involve the deans of colleges, and probably some marketing groups. You may have a centralized IT infrastructure team in charge of getting either a wired or wireless data connection to your signs, but that could be viewed as their role even if no one in that group is thought to be a stakeholder.
Content Management is another huge point of collaboration, and is another critical piece to layout for the roles; the larger the campus digital signage network becomes, the clearer this becomes, because providing content, refreshing it and determining constantly what to say and how to present it is a never-ending task.
In addition to having users in departments operating their own signage, and a clear line of contact for users to reach out when they need help or would like to add signage – there is another aspect of collaboration – the “buy-in” from your users that guarantees growth of your centralized network instead of small DIY projects that tend to pop up. Having to cobble together these small offshoots that randomly pop up is one of the pain points of decentralization and creates a headache when trying to manage content across multiple systems.
As our users see these new and exciting technologies, the requests for this kind of solution are inevitable; it is essential as technology or marketing professionals on our campuses that we be prepared to effectively answer the call when the time comes. Whether the signage is already in place, or you believe the requests are coming down the line, it is in your best interest to learn what is out there and prepare to collaborate with the people around you to use the strengths of your colleagues to your advantage.
I encourage anyone with questions or anyone with input on the topic of digital signage in higher education to reach out to me so that we can expand the collaborative efforts beyond our own campuses and learn what is working from peer institutions. I can be reached via e-mail at wrights@ecu.edu.
Author Stephen Wright will co-present “Operating Digital Signage Networks on Campus,” at Digital Signage Expo 2018 on Wednesday, March 28 at 9 a.m. at the Las Vegas Convention Center.  For more information on this or any educational program offered at DSE 2018 or to learn more about digital signage go to www.dse2018.com.
Stephen has worked as the primary point of contact for digital signage at East Carolina University for the last five years. For three years prior to that he assisted the effort. Stephen has had the opportunity to contribute to the growth of digital signage at ECU, which now counts approximately 200 screens in the university’s digital signage network that spans three campuses and also serves some off-campus areas.
Stephen is a co-presenter at DSE  www.dse2018.com.