As a former tech manager, I have had my share of interactions with interactive or collaborative boards. As a programmer, I have needed to control these devices that range in price and functionality. In my capacity as an audio-visual journalist, I have watched this segment go from hardware-centric to software and back again.
It is with these experiences I approached the new InFocus Mondopad (INF6522). The company shipped me the product in an elaborate road case that came with a built-in monitor lift. Once the top was removed, and the box was given power you could raise the display and test away.
The first thing we did was conduct a call using the integrated InFocus ConX; their soft codec. As the InFocus instructor on the other end explained, you can use the Mondopad as an annotation device, video conferencing system, touch interactive computer. You can add external hard drives and/or USB drives to the system and use it as a monitor for any space.
After the video demonstration, I set about testing out the various functions. I was able to make another video call to an integrator. The call quality was pretty good. It wasn’t the highest fidelity you would get from $10,000 speakers, but it was good for display sound. The touch was quick and responsive with a barely noticeable delay. This only became an issue when I was trying to make it drag by quickly going from one corner to another then switching sides.
The display capture function allows you to take anything on the screen at the time and store it on the hard drive and then share that image inside any of the other apps on the Mondopad. For this test, I brought up a spreadsheet and imported it into the annotation app.
This was the third iteration of the Mondopad I have used. They have certainly increased the overall processing power. This was evidence in the quickness of the annotation as well as the speed of switching between apps. I’m intrigued by InFocus’ business model with ConX, so the integration of that software into the Mondopad makes sense. I’ve been impressed with ConX on the desktop and was equally impressed with the video and audio quality of ConX on the Mondopad. 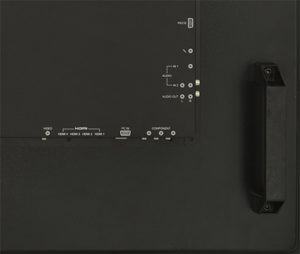 Controlling the Mondopad in the past has been difficult. Earlier in the year, they changed the command strings for essential functions like power and input switching. Those changes were not updated at first, but that has been rectified as of this writing.
If you are considering an interactive display for a conference room or huddle space design, the newest version of InFocus’ Mondopad should absolutely be on your short list of considerations.
Four out of five stars.