You are at:Home»News»Samsung shakes up cinema market

The culmination of over a year’s worth of development, ingenuity, and work came together Friday, April 20 Pacific Theaters Winnetka in Chatsworth, California. The first deployment of an LED screen in a movie theater was unveiled. 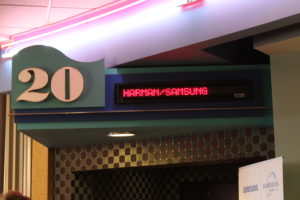 Samsung Onyx with Samsung/Harman as the feature

The Samsung Onyx was revealed to members of the press ahead of a weekend opening for the new screen. At 34 feet wide and 17 feet tall, the 1.5mm pixel pitch display claims a million to one contrast ratio. The impressive contrast ratio is due to the difference in light creation technology; emissive versus reflective. The screen can play 2K, 4K, HDR, and 3D content. Samsung demonstrated this by playing trailers in both SDR (standard dynamic range) and HDR (high dynamic range).
The brightness of the screen was also hailed as a marked improvement over traditional projector/screen combinations. A typical cinema setup can create 14 foot-lamberts of brightness. The Samsung Onyx can do 300 nits, or 88 foot-lamberts, in its standard configuration. Though, the company explained it could go up to 500 nits. For comparison, your average home television is between 280 and 300 nits of brightness. 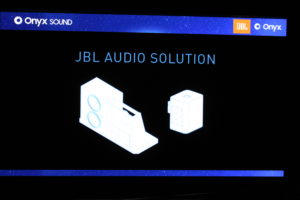 Layout of new JBL speakers for the Samsung Onyx

The Samsung Onyx is also a partnership with Harman Professional Solutions. Harman provided the audio system that accompanies the Onyx. In a typical cinema setup, there are speakers behind the screen that provides front audio through an acoustically transparent screen. With an LED display that is not possible. Harman worked with Samsung to develop an audio system that can play back 5.1 or 7.1 surround sound with the front channel speakers being placed at the top of the screen. Those new JBL speakers, the JBL 3733, combine with two reflector speakers at the front left and right, JBL CRF2, and a Soundweb London BSS DSP. The DSP “darkens” the audio to make it appear to the audience as though the sound was coming from the center of the screen and not the top. The press watched a screening of Ready Player One. Based on that showing, Harman and Samsung have done an excellent job of creating an impressive movie-going experience.
Onyx is the market name for the Samsung Cinema Screen the South Korean electronics giant has been promoting for over a year. At CinemaCon 2017 Samsung first began showing off the idea of a direct view LED screen for movie theaters. They did not, publicly at least, have the Onyx name. Even as late as ISE 2018 Samsung was demonstrating the technology under the Cinema Screen name.
Return on investment was a theme during the presentation by Samsung’s Nick Conti. The screen is rated to last 100,000 hours.

“That is 17 years if the theater is operated from 9 am to 1 am, seven days a week,” said Conti. “It also eliminates the need for a projection room. No projector, no room is needed.” 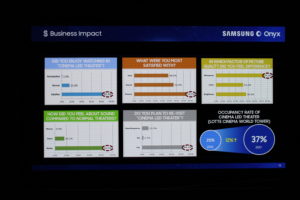 Samsung demonstrating the ROI of the new Onyx screen

Part of the ROI equation is the price. That was a number many members of the press attempted to get out of Samsung with no success. The reason, according to Harman’s Dan Saenz, is the configuration for each theater may be different with mounting requirements, and the number of screens purchased. The official response we have gotten from Harman and Samsung PR was it is currently between “7 to 9 times a laser projection system.” Though, there are some media outlets reporting that cost at “$500,000 to $800,000” per system.
This is a first not only for Samsung but also for the movie industry. If Samsung can develop a demand for direct view LED in theaters, it would give Samsung and other LED manufacturers a new market and an avenue for development that could benefit other areas, including the ProAV industry. Onyx is also a reminder of the good that can come out of the myriad of mergers and acquisitions we have seen recently. It’s a product that brought together several sides of the buyer and the acquired company together to create a pretty remarkable product.