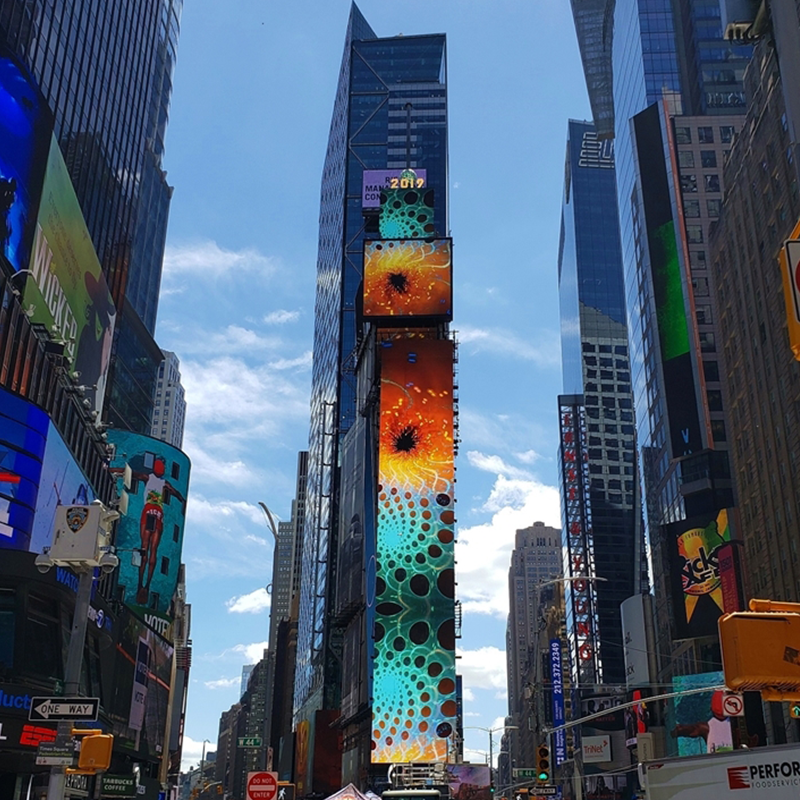 CYPRESS, Calif – One Times Square, owned by Jamestown and the venue for the glittering New Year’s Eve ball drop and one of the world’s most valuable advertising locations, has launched its 350-foot-high unified north wall featuring Prismview outdoor displays driven by the powerful ChristieÒ Spyder X80 multi-windowing processor.

One Times Square was built as the New York Times’ headquarters in 1904 at 42nd Street and Broadway.  Although the newspaper moved to a new building eight years later, One Times Square remained a focal point of the bustling neighborhood and was known for its street-level electronic news ticker. The building was repurposed for advertising in the 1990s, becoming a showcase for dynamic electronic billboards.

Above the new unified north face sign are three additional discrete displays: the top two are 16mm LED video screens while the lower display is 10mm. The Christie Spyder X80 controls the displays at One Times Square driving a unique pixel count that tops 11 million.  If desired, content can encompass all screens to form one giant canvas – for example, the American flag designed by famed digital artists, Le3, furled top to bottom on all screens to honor the fallen on Memorial Day.

The prominent unified north face replaced multiple LED screens with a state of the art single 8mm display which now boasts a resolution of 7380 pixels high by 1312 wide.

“Before, there was no uniformity to the displays on this iconic Times Square property,” says Mark Yokota, consultant to Christie on the project. “Now, for the first time, there’s a cohesive, clean, crisp and professional look to the display’s advertising, graphic and beauty content” whose content is managed by WOW Factor.

“Prismview is a big player in the arena of pro sports and live events, and we have put Spyder in a lot of venues,” says Steve Sluder, system integration manager, Prismview. “Spyder is our go-to video processor when we have to put together a lot of pixels and One Times Square is the tallest display we’ve done in terms of number of pixels – it easily spans 30 floors.”

Joel Turensky, Image Processing Sales Manager, Christie, says the Spyder X80 “is a supreme product” capable of the quality required to play content on the global stage that One Times Square is seen on and “the Spyder meets the superior demand required by global advertisers for professional-grade processing’.  The Spyder X80 is extremely reliable and stitches together content over the vast canvas with the most minimal latency.”

Yokota, who commissioned the system, says, “We made one X80 input available so it could scan an external input vertically along the unified north wall and stretch HD or 4K content to 7800 pixels high.  Other processors can’t deal with that high of a vertical pixel count.

“In addition, router control and an X80 back up unit are constantly in sync with the primary X80 system offering full redundancy for displays that can’t afford to be down,” Yokota says. “Spyder also has a relatively small footprint, which makes for an efficient control room within One Times Square.”

Turensky worked with Sluder on the system design and met with members of the WOW Factor content creation team months in advance to test a preconfigured Spyder.  On the global stage that One Times Square is viewed on, a first light up requires perfection. Testing was done with special high-level digital art content to make sure the first day of commissioning provided a spectacular impression. Unlike the typical start up, this one was photographed by the 500,000 people who pass through the market every day and demand perfection from day one.

“The Christie Spyder team is professional, helpful and accommodating from the design phase to delivery,” says Sluder.  “They are involved at every step from the first conversation about the needs of the owner to the day of commissioning.  It’s a very collaborative effort, and Christie is superior in their role.”

The Spyder X80 and X20 have been a mainstay in Times Square for some time.  The NASDAQ displays next door to One Times Square are driven inside and outside by Spyders and, at Walgreens’ early-generation Spyder image processors drive diagonal LED ribbons.

Lynn Adair was project manager for Prismview with Landmark Signs handling the installation at One Times Square.