You are at:Home»Features»Avnu Alliance delves into feature set of Milan platform

Everything will be networked. Data and network connections are growing rapidly. At the same time, the expectations for audio and video continue to grow and evolve, demanding more from audio/video networks, including connecting more devices.

Unfortunately, as the industry presently stands, interoperability is not guaranteed in this future of AV. In fact, as products and systems become more complex, users can be easily overwhelmed, and interoperability becomes an increasingly elusive challenge. To satisfy audiences who are increasingly expecting more from their AV experiences, the industry needs to re-calibrate and focus on delivering an audio solution that is easy-to-use, scalable, and future-proof. For professional media, it is simply not enough to deliver high-quality audio with fast deployment; this must also be done with a long-term, stable, and viable platform that can evolve with the market’s requirements. Equally important is that networks are able to scale without a competitive market stifling innovation.

Milan was created by and chosen by live sound leaders in Avnu Alliance as a long-term, stable, and viable platform to evolve with the market’s requirements. These manufacturers, in direct competition with one another, have come together to collectively take the driver’s seat in creating and advocating for the change they want to see in the pro-audio market. Through this process they brought to life a vision for a complete media network – one that is easy-to-use, future-proof, open for creativity, scalable across markets, and delivers a convergence between audio, video, and control with IT on one network.

In April 2020, these manufacturers came together to share a technical training about Milan networked systems as part of AVNation’s Learn From Home Virtual Event for Commercial. There were many great questions, too many in fact to answer in the allotted time slot, so they have answered some of the top questions here for all of you.

Have more unanswered questions about Milan? Feel free to ask them here, or on Twitter by mentioning @AvnuAlliance or head over to the Milan open forum where you can find a lot of answers to the most asked questions and ask anything that’s on your mind.

Is Milan different from AES67? Post AES 67 or does it use AES67?
Milan is based on Audio Video Bridging (AVB) network layer, which is a Layer 2 technology. This is quite different from Dante or AES67. Layer 2 by itself only works within a LAN but it offers the benefits of being deterministic for precise timing and reliable transport with almost no effort for setup.

If I have a Dante-enabled mixer, would it need an expansion card that supports Milan to work with a Milan network or is reasonable to use some bridge so I can have a hybrid network with Dante and AVB/Milan?
The mixer would need to have a dedicated Milan interface such as a Milan interface card. The bandwidth reservation feature of AVB guarantees that the AVB streams will not be disturbed by other traffic, therefore it can coexist with Dante in one network. Dante does not have this guarantee so over provisioning is needed to ensure bandwidth.

Do Milan devices work with AVB devices? Does Milan work with Avnu Certified products?
AVB is the underlying technology for Milan. In the past AVB devices were certified for fulfilling the requirements at the network layer but not for interoperability at the application layer.

This has now changed with Milan. All Milan devices are fully interoperable. It is theoretically possible, that an older AVB device could support Milan® network packet and stream formats but it is very unlikely.

Are there any open source resources available for Milan?
The L-Acoustics open source AVDECC Library is an important component for Milan implementations, as it allows users to build an AVDECC Controller which is able to control Milan devices. It can also serve as a base to implement the AVDECC block of a Milan endpoint. The open source AVDECC library is freely available to everyone that wants to build a Milan compliant product. It can be found here.

Is Milan replacing AVB?
Milan is based on AVB technology which is defined by open IEEE standards. It does not replace AVB as the network foundation, it adds an application layer on top of AVB. These standards are developed closely together with the IT industry and thus they have a strong and long-term relevance for the convergence of real time media streams and other data in networked systems. AVB technology enhances the capabilities of Ethernet by adding properties such as stream reservation, deterministic performance, precise synchronization, and intelligent multicasting. Milan utilizes these enhancements to provide a hassle-free, precise, highly reliable and very wide scalable network solution for professional media production systems of many kind. 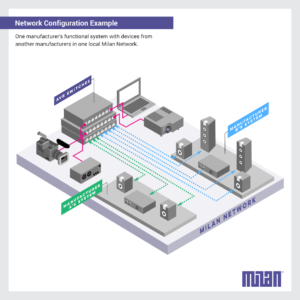 Milan was created by and chosen by live sound leaders in Avnu Alliance as a long-term, stable, and viable platform to evolve with the market’s requirements.

What is the difference between SMPTE ST2110 audio / video / date solution ? Are you compatible with this protocol in the future ?
SMPTE 2110 has been developed from a broadcast perspective mainly in order to fulfil requirements in TV production. These requirements first of all include Wide Area Networking (WAN) outside of local production environments for video signals with associated audio. The demands for reliability, synchronicity and ease of handling are very different between TV production and Pro Audio live sound which explains why different network technologies are needed for the different applications. Thus, at this stage, there is no compatibility between Milan and SMPTE 2110. However, it is not impossible to build gateways between the systems so that all benefits can be combined in hybrid systems.

With distribution of AV streams, like IGMP Snooping, in switches does the Stream Reservation Protocol in an AVB system make it possible for multicast streams to be treated like broadcast by the switch?
AVB and Time Sensitive Networking (TSN) uses a layer 2 stream reservation principle supported by the bridges to assure that multicast traffic using the configured priority is ONLY send on ports where an end-station has registered interest in receiving the stream. The switches understand the concept of a stream and keeps track of streams and their reservation. Streams packets are recognized and routed based on their PCP in the VLAN header.

Part of the switch standard (IEEE802.1Q) specifies how certain traffic classes are treated. Streams are using a high priority queue but are shaped by the Forwarding and Queuing of Time Sensitive Streams (FQTSS) mechanism. This will assure that streams will have guaranteed priority to use the bandwidth they have been able to reserve and not more

This in turn results in two features that are appreciated by AV professionals:

This also means that a lot of manual configuration that is required in non-AVB networks is done automatically by AVB switches. (e.g., VLans, IGMP, unicast/multicast, bandwidth management).

What application is Milan best suited for?
As a layer two technology built on a deterministic networking standard, Milan was created first as a network for live production and events. But live sound is not the only application for Milan – it can also be leveraged in fixed-install applications like enterprise or entertainment settings. Although most of the projects leveraging Milan have been in live sound environments thus far, Milan is also built on an open standard, which means it has broad market appeal, and is supported by IT and is interoperable with the entire stack of standards technology in multiple markets, making it an enduring standard that both AV and IT departments will embrace. With an open standard foundation, Milan enables increased flexibility and reduces the total cost of ownership by bringing an economy of scale, minimizing deployment and maintenance time. And the open nature of Milan allows manufacturers to build their systems while having ownership over the network.

With Milan, we are aiming to achieve ease-of-use around networking for end users, ensuring it just works and keeps working, as well as be a system architecture for manufacturers, providing them the right tools to build their system platforms on, to make that vision happen.

What are the main misperceptions about audio networking among end-users? What can be done to correct these?
When it comes to networked audio platforms, the professional media industry has two major requirements. At the most basic level, it requires guaranteed delivery of high-quality audio, not subject to dropouts, phase shifts, or comb filter effects in line arrays. However, when making decisions on networking infrastructure, end users need to be confident that they have chosen an enduring protocol and a network that can provide support as their media and data needs scale — today, tomorrow, and even years from now.

Today we are in a situation where some companies aim to ‘own’ network standards and run business based on that ownership. Many of today’s solutions have been knit together using proprietary networking solutions, requiring extensive design, installation, and support work from industry professionals, and creating risky propositions that are not guaranteed for long-term viability. This situation will be transitional, in the end we will see open standards becoming dominant in the same way they did in the IT world.

Without open standards we wouldn’t have the level of digitalization we have today, be it in local networks or with the internet. Still, business can be driven by offering smart and useful solutions based on open standards. This probably requires a shift in paradigms and mindset to some people in our industry. As the network has evolved and continues to scale, so has the opportunity for the industry. The network should not be a competitive market on its own or a bottleneck for innovation.

But what does this mean for manufacturers and integrators working with networked devices? Audio and systems engineers should expect more. They should be able to realize the functionalities in their system; their network should always work – it should be easy, reliable and future-proof. What’s more, as consumer technology continues to advance, audiences expect a richer experience for live sound and other commercial AV applications. The network must now become part of the value proposition for manufacturers; it must be open for creativity to enable bringing truly valuable products to market.

For this to happen, manufacturers must work together with others like them, openly sharing information on technology and products, and together defining the requirements for greater network interoperability. This vision for networking should encompass the ease of the analog XLR connector and transform it into full media and data interoperability.

Another misconception is how the network should be managed. Today, most people running AV over IP networks keep this strictly separated from any other traffic and network “customer” management because having various groups on one network can’t be maintained with good enough reliability. With deterministic protocols, like Milan, interference between streams and data are excluded and timely, safe delivery is instead, guaranteed.

Is there a limit to switch hops built into the standard?
The AVB standard itself does not set any limit to the number of hops. However, each hop of a physical medium inevitably introduces some latency, no matter which technology is used on top. The good news with AVB compared to other technologies, is that this latency is bounded, the bound is very low, and it is known and predictable. With AVB, the system designer can determine in advance the number of hops that shall not be exceeded in order to achieve a given latency between a talker and a listener. As an example, if you want to achieve a guaranteed 2-ms latency on a 100Mbps network, you can can typically use up to 7 hops between the considered end stations. In a 1Gbps network you can lower the guaranteed latency to 1 ms at 7 hops or use up to 14 hops at 2 ms latency.