You are at:Home»Business»The Reid Report: Do requirements for minority inclusion actually work?

Never before, in the shadow of a pandemic and in light of the rash of media attention paid to the senseless murders of Black and African-American people across the country, has the ethos of the racial divides within America been so pronounced. We can no longer afford, nor can we willfully deny the existence of systematic racism in our society. Nor can we deny that it penetrates, violently and punitively, into our justice system and places of work. We can blame poor leadership, elections, politicians, pandemics and everything in-between; yet none of these faux boogiemen are the true culprits. The fact is we live and work in a racist and sexist society. And the shriveled diseased hand of that bigotry touches each and every one of us, whether we wish it to or not.

In our industry alone, women and minorities are severely underrepresented, while white males are, not surprisingly, over represented. The monochromatic nature of this industry makes for a number of misconceptions, internal and external, about skill, competence and trustworthiness for those professional persons when dealing with clients, peers and even coworkers. Often, I find women in sales or management, but rarely as technicians and engineers and programmers. With minorities, regardless of gender, not fairing much better. I know three amazing women engineers and have met countless others, and they are far too few and in-between, underrepresented and far too often marginalized.

Can we any longer pretend we live in a great society, obfuscating the fact that our society is anything if not divided? Gripped by division and utterly false in its claims of being equal and/or color blind? Grappling with discussions of race, gender, faith and the like are never easy. Even more so in the current hyper-partisan climate, juxtaposed against the controversies related to hiring and advancement within the AV and IT industries.

The disparaging gap of misrepresentation does not stop sadly with hiring and advancement, however. Company ownership is also a place where we who are so often marginalized are also underrepresented and under rewarded. Most certainly that is true in context to the awarding of bids and contract work. Despite the number of MBE, WBE and SDVOSB businesses and the legal requirements on almost every bid to contract a percentage of these businesses, it does not happen. The ‘good ol’ boy’ networks of the construction business work against those advancements in federal, state and local compliance and allow waivers for white male-owned businesses, to the detriment of the minority and women-owned ones. Even when they are legal mandated to solicit and award sometimes upwards of 40 percent of a bid to MBE and WBE and the like, we time and again see that these waivers are just handed out along with checks to the same companies. Recently, a study was released showing the depth of this thievery and it is shocking.

In an insightful and incendiary report, issued by the State of Illinois Department of Central Management Services for fiscal year 2019; recording in detail the awarding of all BEP (Business Enterprise Program) contracts for that year, it becomes abundantly clear that the awarding of state contracts is anything but fair. What the report shows unequivocally is that minority-owned male and female businesses and veteran-owned businesses are receiving the least of the awards possible. In comparison, the state of Illinois awards on average more than 50 percent to Caucasian-owned women businesses, thus ‘satisfying’ the BEP requirement, while still under valuing and keeping contracts from reaching minorities and veterans in large numbers. In just an overview, the numbers are more than telling: 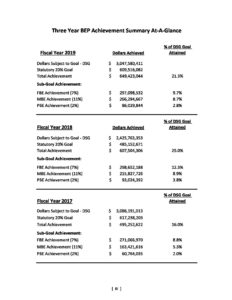 Clearly the number speaks for themselves as it pertains to the lackluster awarding of contracts. For 2019 alone only $649,423,044 were awarded to BEP,  21.3 percent  of over three billion dollars allocated. Granted the mandatory goal was 20 percent and they exceeded that by 1.3 percent. Nonetheless, we can all agree that spending less than half of the monies allocated to minorities, disabled persons and women with those vendors and companies is abysmally poor management. This is even more impactful when you consider the State of Illinois is as diverse as it is and cannot or will not seek out and award more lucrative contracts to minorities and veteran-owned businesses. The waiver system, which allows large, mostly white-owned and managed firms, to be exempted from partnering with or even seeking to meet the BEP utilization quotas is at the heart of the problem as well. Besides what is sure to be an inherent and systematic racial preference for these companies; if after the hard work of seeking some degree of equal treatment through reforms and legislation these white-owned companies can just get a waiver, then the BEP requirements are toothless and meaningless.

Without enforcement and a guarantee that the majority of monies earmarked are spent with qualified vendors, alongside ending the waiver program, things will never change. The engrained and systematic redlining of contract awards is in fact a reality and needs to change.

The numbers are staggering and disturbing, as to the disparagement of contract awards, across the known spectrum, as it relates to white versus minority contractors, vendors and businesses. This depreciates and undervalues these businesses while simultaneously extending to veteran-owned businesses as well an implicit connotation of unworthiness, which in turn keeps these disadvantaged businesses in that position. The effect is one of making them in need of hand outs, rather than equal in their right and need to participate. With this in mind, it is equally puzzling and upsetting the preferences for even white women-owned businesses over their minority and veteran counterparts, in spite of utilization requirements for these businesses, in that 10 to 30 percent range on average.

We stand on the precipice of one of the greatest watershed moments in modern American history. A time when respect for the acknowledgement of racism, including women’s suffrage, are at an all-time low, brought about by media attention to the conflict and not the solution. We can, however, come together and overcome with our best intentions and combined efforts to rebuild, reorganize and redirect that negativity into something palpable and pragmatic. I pray we find that new path to that new normal and once there we find a better world and better future than we previously thought possible. Wherein all people are given the chance to excel and work at their craft in a fair and equitable environment of peers from every background. Let us construct that future and let us bring it into fruition here and now, not later when it seems more convenient or less painful. True change, the best change, comes when it is most difficult and least convenient and the betterment of the few and downtrodden always inevitably leads to the betterment of all others.

Sean Reid is a consultant and owner of Astroman AV.