With over 250 seats and numerous displays located throughout, the pirate-themed One Eyed Jack pub and grill is a popular destination for sports fans in Oshawa, Ontario. Recently, the owner decided to expand the franchise, opening a new location in Peterborough. To provide the signature One Eyed Jack experience for guests, they called on integrator Infinite Corporation to pack the space with AV technology.

In addition to six zones of audio, Infinite Corporation installed 36 displays in One Eyed Jack Peterborough, with sports and other content provided by eight TV boxes. Highlights include wall-mounted 65-inch Samsung TVs, 20 24-inch booth TVs, 55-inch Sunbrite TVs on the outdoor patio, and the main attraction — a 2×3 video wall in the main bar consisting of six 49-inch Samsung displays. To deliver the best viewing experience for patrons, employees needed to be able to send any video source to any display and change the video wall configuration on the fly, whether it be one image across all six displays, six independent displays, or any other combination. To achieve this, a cost-effective video distribution system was required that would deliver outstanding video quality and provide integrated video wall capabilities, in addition to a control and automation solution that was simple enough for anyone to use with minimal training.

“Just Add Power is one of the world’s best video distribution systems, so it was at the top of our list for the new One Eyed Jack location,” said Kirisan Thavaraja, sales manager at Infinite Corporation. “The company is known for its award-winning product line and eye-catching picture quality. We knew that our client would love it.” 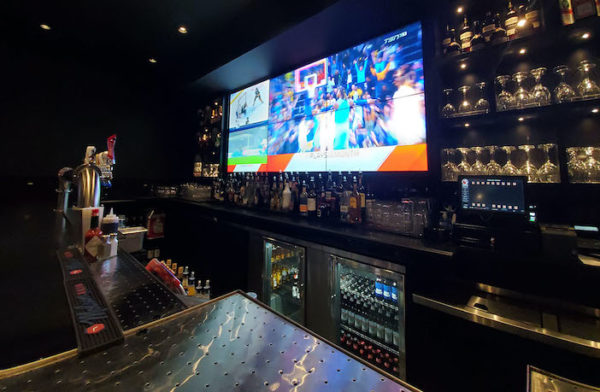 Each of One Eyed Jack’s displays is equipped with a 3G receiver, while each TV box is outfitted with a 3G transmitter.

Infinite Corporation utilized Just Add Power’s 3G Ultra HD Over IP platform. Each of One Eyed Jack’s displays is equipped with a 3G receiver, while each TV box is outfitted with a 3G transmitter. In addition to support for 4K Ultra HD resolutions, HDMI 2.0 devices with HDCP 2.2, and uncompressed lossless multichannel audio formats — including Dolby Atmos — the platform offers built-in video wall functionality for displays installed in portrait and flipped configurations, as well as image push, pull, and pop features. An integrated scaler on the receiver automatically adjusts the picture to fit the screen.

Designed with an innovative modular approach to video distribution, the Just Add Power platform also allows the sports bar to cost-effectively add displays, sources, and even emerging formats in the future with ease. Any additional screens or sources would only need another small receiver or transmitter, respectively, added into the system. Employees have complete control over their viewing experience via a Control4 automation system. They can change any display to any source and select their desired video wall configuration.

“The system at One Eyed Jack turned out great,” added Thavaraja. “The franchise owner is very pleased with the video quality and the ease of use provided by Just Add Power and Control4 automation. They feel that the installation has given them a leg up on the intense local competition and is helping the sports bar shine as a premiere destination in Peterborough.”