SCOTTSDALE, Ariz. – LTJ Systems selected Just Add Power video distribution to deliver a high-end AV experience at Old Town Scottsdale’s Casa Amigos Restaurant and Skylanes Boutique Bowling Alley and the results are garnering rave reviews from those who participated in the project and the patrons.

After closing the doors on its Livewire concert hall in Old Town Scottsdale’s entertainment district, the Evening Entertainment Group (EEG) was left with the question of what to do with the 11,000-square-foot, two-story property. The answer: transform the space into two distinct venues under one roof. Today, the ground floor houses the Casa Amigos Mexican restaurant, where patrons can enjoy Southwest cuisine and signature cocktails, while the upper floor — previously serving as Livewire’s balcony and mezzanine — has become the Skylanes boutique bowling alley and lounge.

While a restaurant and a bowling alley deliver vastly different guest experiences, Casa Amigos and Skylanes do share some common ground. For one, both offer a home for Steeler Nation, providing fans with a gathering place for every Pittsburgh football game. Each venue also morphs into a nighttime hotspot with a DJ, dance music, and bottle service when the sun goes down. To create a high-end AV experience for sports fans and nighttime revelers in both spaces, a key element to the renovation of the former concert hall was a technological upgrade, performed in-house by Jason Jones and his company LTJ Systems (LTJ), which does sound, video, intelligent lighting, and anything new with tech.

To compliment the state-of-the-art Dante sound system left over from the building’s days as a music venue, LTJ outfitted Casa Amigos and Skylanes with a combined 89 displays. Highlights include two 12-foot by 10-foot video walls in Skylanes that seamlessly merge to create one massive video wall. Both venues feature island bars surrounding 12 displays: Five on each side and one on each end. Each side serves as a 1×5 video wall that can function as one big display, five individual displays, or any other configuration. All 12 displays can also be combined to create a banner-style effect with content traveling around the bar. Casa Amigos offers an additional six-display video wall located behind a second back-wall bar.

Feeding the screens at both Casa Amigos and Skylanes are 15 DirecTV boxes, a Roku player, two media boxes for advertising, and four Just Add Power VBS-HDIP-759A 3G+4+ video tiling processors, each of which allows up to four inputs on one screen in different configurations. To incorporate additional sources as needed, there are two inputs located in each DJ booth and one in a street-level junction box outside the building. 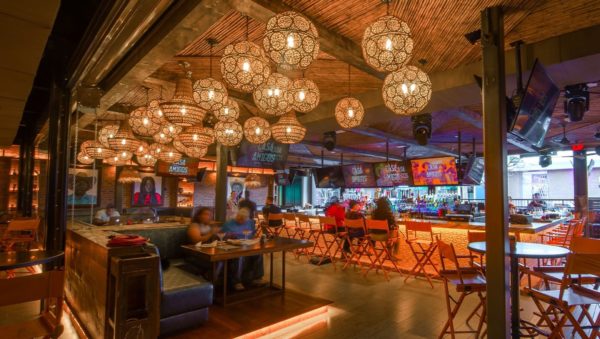 When it came to distributing the shared video sources, a system was required that could be trusted to provide reliable operation day in and day out. In addition, managers in each venue needed the ability to quickly and easily change the video source on any screen or group of screens — in addition to video wall configurations — without interfering with sources in use by their sister establishment. To provide these capabilities, LTJ utilized a solution that has proven successful in a number of the company’s other installations: Just Add Power’s 2GW/3G HD-over-IP platform, combined with networking solutions from Luxul and DTVGameControl’s iPad-based app for control.

“I installed my first Just Add Power system in 2014, and the company’s solutions have been a staple in all my projects since,” said Jones. “The reason is pretty simple: Just Add Power offers rock-solid reliability and powerful functionality that other solutions just can’t match. In fact, I’ve yet to experience a failure with the company’s products, no matter how many displays or sources are involved. Combine that dependability with a Luxul network backbone and the intuitive DTVGameControl app interface, and you’ve got a high-performance solution for any venue.”

Each video source for Casa Amigos and Skylanes is equipped with a Just Add Power VBS-HDIP-715 PoE transmitter. The transmitters are installed in a rack with the video sources, along with four Luxul XMS-7048P 52-port stackable Gigabit PoE+ L2/L3 switches, which manage the wireless network. A Just Add Power VBS-HDIP-515 PoE receiver is attached to each display. The Skylanes video wall is equipped with two receivers: one for each 12-foot by 10-foot half. The receivers feature an integrated scaler that automatically adjusts the picture to fit the screen, while Just Add Power’s built-in SwitchPlease web interface allows LTJ to remotely access the devices to perform reboots if needed.

Completely scalable, the HD-over-IP platform allows LTJ to expand the venues’ shared system with an additional screen, source, or video format by simply adding receivers and/or transmitters. Taking advantage of this capability, two additional transmitters are located in each venue’s DJ booth. A transmitter and receiver located in an outdoor junction box also allow Casa Amigos to easily accommodate an additional source and display for large events such as the Super Bowl.

Managers at Casa Amigos and Skylanes control the system from their respective venues using the DTVGameControl floor-plan-based iPad application, which allows the system to be split in half between the establishments by hiding certain inputs from each other — eliminating conflicts when selecting sources. For each venue, the intuitive interface depicts the layout, display locations, sources, and more — all on one screen. Users simply tap a source to select it, choose a channel, and tap on the screen or screens they want to display it on. An additional master iPad located in the rack shows all inputs.

With Just Add Power’s tiler, users can easily display up to four images in a picture-in-picture configuration on any display. A live preview window lets them confirm their selection before making it official. The interface’s picture-in-picture mode also allows users to drag images where they want them on the screen, while pinching and zooming to adjust sizing. A video wall mode makes it simple to switch up any video wall’s configuration. To quickly power on and off displays, the Just Add Power transmitters’ CEC feature sends on/off command signals over the same HDMI cables that deliver the video. This allows managers to power on/off all displays with a screen tap, without the need for additional IR equipment, cables, or remote controls.

“As expected, the Just Add Power system has performed flawlessly for Casa Amigos and Skylanes,” added Jones. “And with the DTVGameControl app interface, it couldn’t be any easier to operate. Each venues’ managers required very little in the way of training to get up and running using it, and there have been no issues with the two establishments sharing sources. For guests, the end result is an amazing experience that has put both venues on the map.”